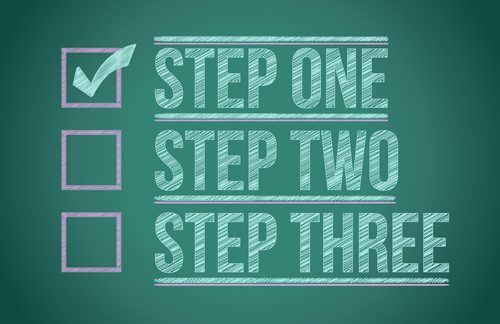 Early in my sobriety, I just went through the motions.

I went to my meetings because I was told to but was hoping sobriety would happen through osmosis. I didn’t have the time or energy to put into the 12 addiction recovery steps.

I knew I was holding on by a string and wanted it better without having to do the work involved. When the AA program and addiction recovery steps were first introduced to me, the first Step made me shake my head with some cockiness. It reads

“We admitted we were powerless over alcohol and that our lives had become unmanageable.”

Me, powerless? I held an executive job at a Fortune 500 company – I wasn’t powerless – I was powerFUL. Was my life unmanageable? To me, no. I went to work, I did what I was supposed to at home – paid the bills, played with the kids, took the trash out, etc. I was managing everything my way and it was fine. I was so selfishly in my disease that my thinking was completely distorted.

After a failed attempt at sobriety, things got worse. With a new work promotion came more stress and more hours. I didn’t have time for AA or my family for that matter. I was climbing my corporate ladder made of old rotted wood that had been duct-taped together. It couldn’t hold me, my disease, or my ego any longer. My drinking began early and ended later.

When the Vodka began to take the place of creamer for my coffee, I started paying attention.

Feeling sick was the norm for me; I was miserable and my marriage was in jeopardy. I finally decided to swallow my pride and called a good friend who was in the AA program.

Back in the rooms, I found a sponsor and began to embrace the 12 addiction recovery steps outlined in the book of AA. It was then that Step 1 became a relief to me.

Yes, I was powerless over alcohol – it had a grip on me that I couldn’t break and was afraid to break.

And yes, my life was unraveling little by little and becoming so unmanageable, I was scared. I was relieved to know that by admitting and believing this step, the following steps could and would help restore my life to sanity.

I’m happy to say that although it hasn’t been a smoothly paved road, I’ve been sober for 7 months and 4 days. I am working on a balance, with AA meetings being my first priority along with my family and work. My life is better than it has ever been before, and I can only hope it will get better as I practice the 12 steps of Alcoholics Anonymous.