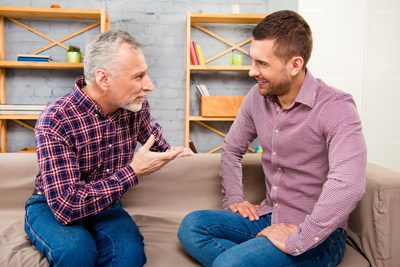 Sponsorship is a key element to 12-step recovery. Although there are no rules to sponsorship, there are suggestions based on the experience of others. One of these suggestions is that men sponsor men and women sponsor women. To be blunt, I thought that was a ridiculous and archaic thought process. What is the difference in who sponsors you? Well, as a gay man, I soon learned the importance of this suggestion.

My sex life in addiction was out of balance, to say the least. Just like all other relationships in my life, I did not have a healthy understanding of boundaries in this area. My sponsor was the first healthy relationship I had ever developed, at 46 years old. It was based on honesty and openness. The only way to truly begin to heal my past was to be as forthright as I could at any given moment with my sponsor. I soon learned that the suggestion of treating genders in a separate environment was based on ensuring a safe place for recovery.

I have had male and female sponsors. I do believe that a male can have a female sponsor and vice versa if there is not even a hint of sexual impropriety. But there is a heightened sense of vulnerability at the beginning of recovery already. Add to the mix a very intimate relationship with a sponsor, even though it’s not sexual, and this can be a recipe for disaster. Not to mention that not every person has the purest of motives.

I have sponsored five men in my recovery so far.

All but one were straight men. We will call the other one “Joseph.” I was a little over two years sober when I began working with Joseph. He was the fourth person I had sponsored, so I had some experience. We started as a typical sponsor/sponsee relationship. We would talk on the phone daily for a “check in,” we would go to meetings together and meet one-on-one weekly. We would read out of our literature and work on his journey of recovery.

It was only a few weeks into this process that I began to see that things could go down the wrong path. There was a sense of more going on than just working on our program. I knew this attraction had the potential to cause great harm to him and myself. I had to make a decision. He now has another sponsor and is coming up on nine months sober.

There is nothing more important to me than my sobriety, no matter what difficult decisions need to be made along the way. So my belief is that sponsorship should be first and foremost a relationship that feels safe. In most cases, that sense of safety requires a complete lack of sexual tension or attraction.